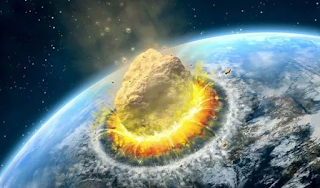 CNN - Apparently last month, one of Trump's secret spy satellites collided with the asteroid named 52768 (1998 OR2) which is estimated to measure 2.5 miles (4.1km) across. This Mount Everest sized chunk of rock was supposed to near miss the earth on April 29, but now appears to be headed for a direct collision on or about April the 29th!

Needless to say, this probable mass extinction event will likely put a huge damper on the November 2020 election cycle, as few if any humans, are expected to survive to that point in time! Chuck Schumer, in a prepared statement, told CNN that Trump was now in fact, a 'true existential threat' to the entire world! He then announced his retirement.

The asteroid, which is now estimated to be traveling at 19,461 mph or over 25 times the speed of sound, is thought by experts to be 'pretty darn hard' to stop or divert in the time allowed. They've recommended that the US call for an April month long National Holiday with everything being free of charge! Bernie Sanders was all smiles concerning this development with Joe Biden also accusing Trump of engineering this disaster as a means of avoiding a Presidential Debate! CNN, meanwhile, has announced all day long coverage of when the asteroid hits as a way to raise their ratings.

There is just a small chance that the asteroid will skim by just over the surface, and then rocket back out into space. Unfortunately, it would be taking most of the earth's atmosphere with it. Sorry to be a buzzkill, but it's hard to spin this event up into a better light!

Lastly, this just in. In a surprising twist, it was just confirmed that the satellite was a joint effort conceived of and launched by Russia and Trump, over a year ago, with it's destination being Uranus.
Posted by Dan Owen at 11:03 AM