NASA tracks a 4KM asteroid approach - Could end civilization if it hits! 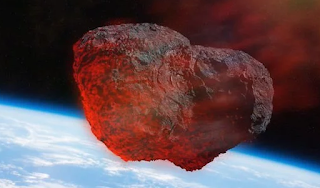 AN ASTEROID big enough to end civilization should it ever hit will approach our planet in April, NASA's asteroid trackers have found.

The asteroid is being watched by NASA’s automated tracking systems at the Center for Near Earth Object Studies in California, US. The asteroid has been officially called 52768 (1998 OR2) and is estimated measure up 2.5 miles (4.1km) across.

An object this big could potentially spell the end of the human race if it strikes the planet.
NASA estimates the rock is heading our way at speeds of about 8.7km per second or 19,461mph (31,320kmh).

At this rate, the asteroid will close-in on Earth on April 29. When this happens, NASA said the asteroid will make a “close approach of about 4 million miles away” to our planet. According to the Planetary Society, an asteroid bigger than 0.6 miles (1km) across is big enough to threaten global destruction.


Astronomers estimate such objects have a one in 50,000 chance of hitting Earth every 100 years.
The Planetary Society lists the following impacts: “A crater of 10km or more: global devastation and possible collapse of civilization.”

Dr Bruce Betts from the international group of astronomers said: “Small asteroids – a few meters wide – hit frequently and burn up in the atmosphere and do little damage.

“Chelyabinsk size asteroids – about 20m that hit in 2013 – create shock waves that shatter windows and cause injuries.

“Tunguska sized – about 40m that hit Siberia in 1908 – could completely destroy a city or create a tsunami.

“Larger asteroids that hit on average less often could cause regional destruction.


“Even larger asteroids that hit even less frequently could cause a global catastrophe.”
The destructive potential of space rocks this big was also outlined in a 2018 report published by the US National Science and Technology Council.

The National Near-Earth Object Preparedness Strategy reads: “Objects close to and larger than one kilometer can cause damage on a global scale.

“They can trigger earthquakes, tsunamis, and other secondary effects that extend far beyond the immediate impact area.”

For comparison, the asteroid that is believed to have killed the dinosaurs measured about six miles (10km) across. Source: https://www.express.co.uk
Posted by Dan Owen at 11:09 AM