The Horse-Burger. Has he lost his mind?

OK. I'll save everyone the suspense. I have been adjudged, by a panel of psychiatrists (aka nut doctors), as a 'marginal' individual on the basis of mental stability. That said, I'm still loose out in society, have a spatula and am considered somewhat dangerous only in the kitchen! Disclaimer: No actual horse meat was used in the making of this meal!
---------------------------------------- 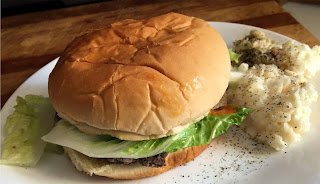 My current 'Old Man Styled American Diet' (COMSAD), while not expressly allowing for comfort foods such as hamburgers, did not specifically exclude them either! To that end, I made myself up a very simple burger with just one small twist. I added some horseradish to the duo of ketchup and mustard that I normally apply. I called it a Horse-Burger, as a result. (It's a free speech thing).

So, I had me two Ball Park buns, a hamburger patty, a slice of onion and the aforementioned trio of condiments. Simple. (Much like the cook)! Preparation was a breeze, as I cooked the burger on a 20 year old Joe Foreman grill, that was working better than I was. The whole affair took about ten minutes, start to finish. I also added a dollop of Reser's coleslaw to the plate, right next to the burger and then sat down to dig right in....

RESULTS: In what might be described as 'youthful enthusiasm' (?), I used perhaps a tad too much horseradish! [One good side effect - My sinuses cleared up for the first time in quite a while!]

All that said, the Horse-Burger was pretty darn good and tasty! I do plan to make it again!

The total cost of this meal a deal was just about a buck. Contrast that to an order of a Big Mac with medium fries at close to $8!! Below is a fairly accurate estimate of the nutritional values: