The Pasta Sauce Hailed as the World’s Best!

One of Julia Child's most famous recipes is also the simplest to make. Her pasta sauce only requires three ingredients and cooks up in less than an hour!

First, the ingredients: You'll need a 28-ounce can of whole, peeled tomatoes; one peeled, halved onion; and 5 tablespoons of butter. (Yes, 5 whole tablespoons of real stick butter.) You'll also want a pinch or two of salt. 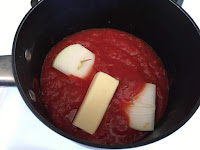 Put everything together in a single pot and set it to simmer over medium heat on the stove for 45 minutes, uncovered. Give it the occasional stir.

And that's it. After the 45 minutes is up, toss out the onion halves, and pour the sauce over your favorite pasta. Easy greasy.


Even today, the sauce's simplicity makes it a little radical. The raw onion and regular butter look flat-out weird just sitting there in a pot of tomatoes. But banish the skepticism, please.

March 5, 2020 – I made up a batch of this and, yes, the recipe is super easy! The only change I made was that I used a 28 ounce can of Red Gold crushed tomatoes. I also substituted a pinch of rock salt and added a bit of water during the cooking process to maintain the sauce's consistency.

After 45 minutes, and after I did stir it up a few times, I cooked a small batch of shell pasta and sat down to lunch. Here's how I rated this recipe on a scale of (1=horrific to 10 = awesome): 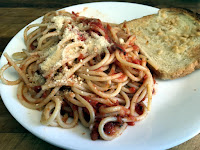 Update: Never being one to leave well enough alone. The next day, I took a 2 ounce portion of sauce, added a 1/4 tsp of garlic powder and a dab of red wine and just a bit of dried oregano. I topped this off with some Parmesan cheese. The result was even better than I expected!