Have you run out of stuff to worry about yet? 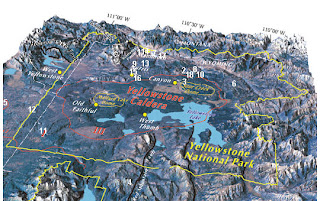 Well, that’s why people like me are here for ya. While there are many daunting challenges facing our country these days, things could be worst.

Take Yellowstone Lake, for instance. What appears to be a beautiful centerpiece to the natural splendor that is part of Yellowstone Park nestled in the northwest corner of the state of Wyoming, hides a dark secret. While very tranquil on the surface, it underneath lurks a huge caldera just five miles below. A monster, that should it get out could possibly spell the end of the United States and even perhaps life as we know it on planet earth. And now that monster maybe stirring.Watch this documentary video! 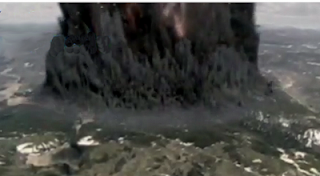 Ever since 2004, geologists have been carefully monitoring the 24 by 45 mile caldera located under and around the lake. Using data collected on the ground and from satellites, scientists say the Mallard Lake Dome, west of Yellowstone Lake's West Thumb, has risen 4 centimeters a year since the middle of 2004. Meanwhile, the Sour Creek Dome north of Fishing Bridge has risen about 6 centimeters a year.
That the surface over the caldera moves up is not that unusual. Portions of the caldera have risen more than 3 feet between 1923 and 1984 and then dropped nearly 8 inches from 1985 to 1995. Measurements in 1995 and 1996 showed the caldera rising again before starting to fall in 1997. The latest upward motion has been unusual for its speed. According to researcher and geologist Bob Smith, “"It's like inflating a balloon, but the balloon is capped,"

Only recently, since towards the end of 2008 has the rise begun to slow. My question is whether this is due to the magma levels lowering or because the dome overhead is reaching critical mass. I ask myself this question, “How much force is required to move a piece of the earth that is 34 miles by 45 miles in circumference and over fives miles thick? What begs that question is what would happen if that energy were to be released all at once?
Posted by Dan Owen at 12:46 PM