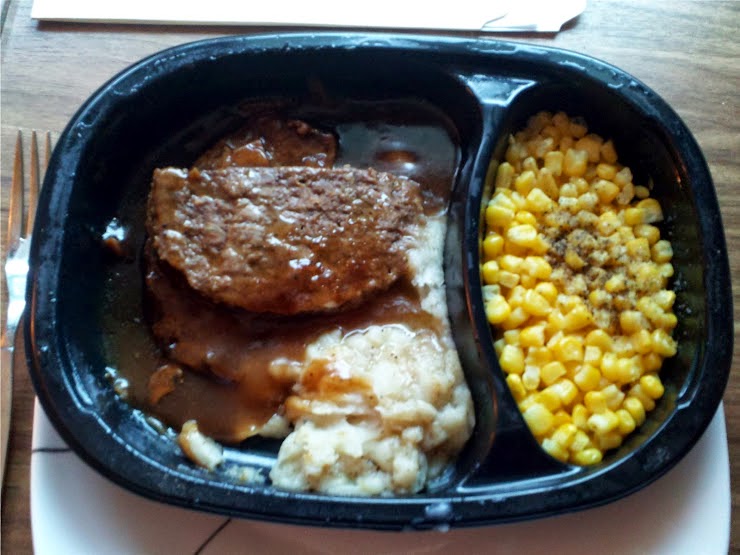 Holy mashed pertatters! Just a day after I published a critique on Banquet’s Salisbury Steak Meal (wherein I compared it to meatloaf), now I have an actual meatloaf meal with which to make a side by side comparison. Bless my lucky stars.

This meal has the same two sides as the Salisbury Steak Meal. And, yes, the Salisbury has grill marks! A dollop of mashed potatoes and a smattering of corn. Not enough to really me fill, but enough to tantalize.  Now, let’s take a look at the nitty-gritty. Shall we? Let’s see what we get for eighty-eight cents (now a buck in late 2011 and still a buck in Dec 2014)!

First the directions for preparing. In this meal, you are instructed to remove the plastic film from over the potatoes which is just like the Salisbury Steak (hereafter referred to SS). As with the SS, I was instructed to nuke it on high for three minutes. Stir the potatoes. Check. And then nuke it for about two minutes more. Pretty much the protocol for the Salisbury. Wait! Is it possible that the meatloaf meal and the Salisbury steak are one and the same? Let’s look at the nutritional analysis. Maybe there’s some difference there! 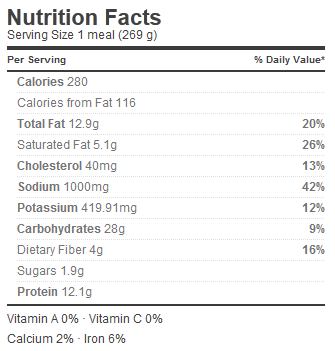 OK, let me see. The calories in this meal is at 280 as compared to 290 for the steak. Calories from fat were 150 for the Salisbury and 120 for this meal. Cholesterol is 10 mg higher with the meatloaf at 40mg. But, there’s 100 mg less salt. So, all-in-all, these two guys are pretty much the same deal.

Now, as to taste. After nuking the tray for the required time, I slathered on a little butter, salt and pepper for added gustatory enjoyment and chowed down. In a nutshell, not really all that bad. The meatloaf tasted like meatloaf (abet a thin meatloaf). It could have also been the Salisbury steak for all I could tell. The corn was excellent and the mashed potatoes tasted even better after I spooned some gravy over them. Made me wonder what was in that stuff? But, for a Saturday night, while watching a really bad movie on the Sci Fi Channel, this deal was OK. Score = 8!
Posted by Dan Owen at 6:24 PM