A tale of two monkeys and an insane debt ceiling. 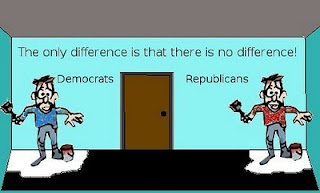 I think by now, most Americans have come to the realization that we have somehow, someway painted ourselves into a horrible fiscal corner. The real news, however, is why that should be such a surprise. Both parties on Capitol Hill have been extremely skilled at doing just that for decades. Problem is in 2011, we are all just about out of space.

In short order, this government will need to raise the debt ceiling for the tenth time in ten years. Like some mad family member who’s addicted to credit cards and keeps asking the card company to raise their credit limits, the America people have quietly tolerated this insane conduct for too long. We could have run this great country like a well run corporation and showed a profit. Instead, we’ve treated her like a cheap whore which very shortly won’t even be worth a quick jump.

Now, the fruit of all this waste is beginning to come home in a big way to the American worker. Just ask California residents about the proposed 59% hike in health insurance (the third since October). How about the cost of gasoline or groceries? Did anyone notice the country's infrastructure is crumbling? Do you really think this is all going to end well?

Now is the time for every American to get involved. Not to save the Republic, but to salvage it. Tell your representatives in Congress to say no to raising the Debt Ceiling. Tell them that from now on credit will be mighty hard to get. Tell your state representatives to help organize and repeal of the Sixteenth Amendment. Tell them that you intend to vote the Democratic Party out of existence along with anyone else who thinks that running a country into the ground is the way things should be.
Posted by Dan Owen at 9:35 AM