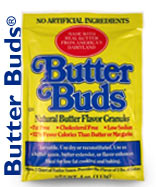 While eating at a local hospital one afternoon, I noticed some packets lying on the table that were alternatives to real butter. They are called ‘Butter Buds’ and are made by a company of the same name located in Racine Wisconsin.