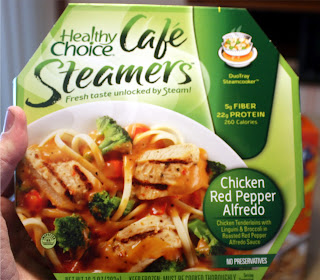 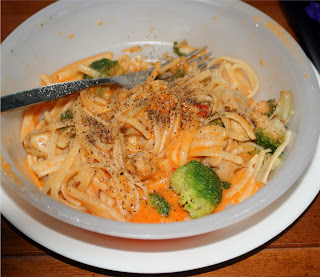 OK, after reviewing and then consuming some, shall we say, less than wholesome frozen meal as of late. I decided it was time to step up to one of the Healthy Choice entrees. We are, after all, what you eat! For this go around, I decided on the Chicken Red Pepper Alfredo meal more due to the fact that I liked the title than anything else. This is one of the ‘Café Steamers’ offerings that is supposedly a ‘fresh taste' unlocked by steam meal a deal. Anyhow, it has some chicken and pasta in it; two ingredients that suit me to a tee. This dish also employs a device called a ‘DuoTray Steamcooker’. Sounds advanced! This meal which costs close to $5 in 2011 is well above other TV dinners I’ve critiqued so far, but golly, I wanted to experience what the rich folks eat for a change.

As you might surmised, the nutritional content is head and shoulders above other (read much cheaper) meals I’ve eaten. The old adage that you get what you pay for definitely applies here. I have to admit, though, I like what I’m see on the label. Calories are a modest 260 for this 292 gram meal. Only sixty of these come from fat. Cholesterol is a livable 40 mg and the sodium was a meager 510 mg. This represents some of the best nutritional  figures I’ve seen so far on a packaged frozen product.

On to the preparation. After reading the instructions, I determined that below the meal was a tray of sauce of some kind. After microwaving everything on high for about four minutes, I removed the steamer tray and poured the sauce over the rest of the meal. Got to admit, it smelled pretty darn good. For the over all taste grade, I would award this a sold B or a 7 on a scale of one to ten. And, even at five bucks (purchased in Branson mo.), this meal gets it done in both the nutritional and taste department. Note: When I purchased the same meal in Forsyth, Mo some months later, it cost only $4! Hmm, must be de-flation at work!
Posted by Dan Owen at 7:12 PM