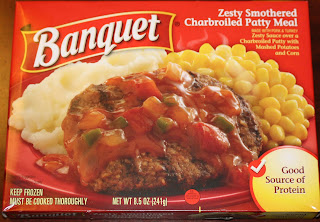 Once again, I confess to being the victim of a catchy name. I mean what man doesn't want to be smothered by hot and tasty food? That said, the march of the meals costing just a buck goes on as will my endless writing about them. But, seriously once again, what man can resist words like ‘zesty’ and ‘smothered’ especially when used in the same sentence? I feel strongly that the reference was in regards to the 'beef patty' pictured on the cover of the meal. Meat, right? Actually, it took me a minute to figure out just what this patty is made of. According to the ingredients label, it’s a combo of pork and mechanically separated turkey meat. (I'm not sure I like the sound of that). According to Wikipedia, this is a paste-like product produced by forcing turkey bones, along with attached edible meat, under high pressure through a sieve or similar device that separates the bone from the edible meat tissue. (Now we all know what mechanically separated means)! Sounds positively yummy!

So, for about a buck, you get a 241 gram combination of meat, potatoes and corn. The package proclaims this meal to be a good source of protein (of course so’s a rat when you think about it). There are 280 calories of which about half are from fat. The sodium is at 750 mg with the cholesterol down a bit at 30 mg. While this meal will not kill you outright, it does get its two cents in.

The directions for preparing this meal is simple as usual. Remove the plastic over the potatoes, cook

on high for three minutes, stir potatoes and the heat for another couple of minutes. If I had a nickel for all the times I removed the plastic from the potatoes recently….

As for taste. Surprisingly, the patty itself was not all that bad. The sauce really helped. It actually tasted like their meatloaf meal, only it was a little hotter. The potatoes tasted like they were instant and the corn…well it tasted a lot like corn.

All together, this is not a bad meal, especially considering the low calories. If you’re on a diet and you’re broke like me, this one could be a candidate to grace your freezer.