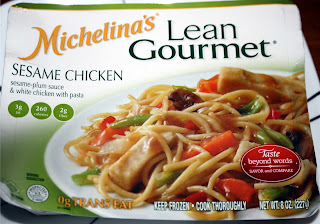 I would have guessed that any food description with the word sesame in it would be OK. After all, sesame seed plants are one of the oldest cultivated plants in the world! Why, I often eat hamburger with buns that have sesame seeds sprinkled over them (why this is even done is a subject for another post). So, I figured since this meal-deal was also on sale, I’d give it a go.

This Lean Gourmet offering comes in at a meager 260 calories and even the sodium, at 600 milligrams, ain’t all that bad. But…it’s also an Asian dish – something I missed when I pick it up at the store. It’s not that I don’t like all things Asian; let’s just say that I’m more a meat and taters kind of guy. Still, it was on sale and so into the microwave it went. 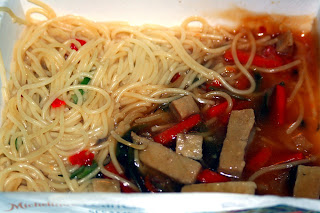 This brings me to a problem I have with this line of meals from Michelina. Most of these packages instruct one to ‘tear a corner to vent’ which is OK. What’s not OK is that the instructions are on the bottom of the package. So, if there’s more than one operation to perform in the prep cycle (and there is), you have to carefully hold the whole affair up over your head to see what the next step entails. Most times, they want you to open up the package and stir this or that before re-nuking for another minute or more. Problem is, that lid like to curl up and so is really difficult to place back over the contents! I’m forced to place some kind of plastic utensil over the lid to hold it down! Michelina – This was not a well thought out process and you need to come up with something else.

After working through the intricacies of meal preparation, I sat down to eat. Right off, I noticed that the pasta was not al dente, but rather al soggy. Also, there was the issue with actually finding any chicken. I did spy what appeared to be some meat cubes, but they were too small to readily identify ad coming from a bird. Lastly, I found the taste to be mildly objectionable. Asian is just not my cup of tea and even though I ate the whole meal, it’s not some road I plan to travel again in the near future! This one gets a 5 on a scale of 10. Another in my growing list of entrees I plan to serve to guests I don’t particularly like.
Posted by Dan Owen at 9:45 AM