The flu is making early inroads this year! 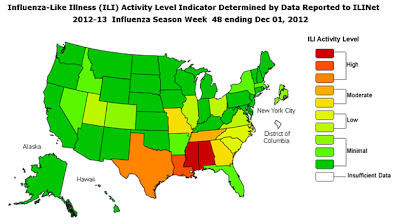 After experiencing a number of years where the onset of influenza was either late or very moderate, this year could be a change for the worst!

As of the latest report by the CDC dated December 1, 2012, the flu is really beginning to ramp up in some states, most notably the southeast. As the graphic of states would indicate, the incidents of ILI or Influenza Like Illness is becoming widespread in states like Texas and Louisiana while Mississippi and Alabama are getting hammered! My home state of Missouri is doing OK, so far with only moderate to low occurrences being reported. Interestingly, neither Taney or Stone Counties have seen a single case so far, but that will more than likely not remain the norm for long.

This season, the main problem bug seems to be H3N2 aka Type A/Brisbane/10/2007 which is the same bug that was prevalent last year. It's thought, therefore, the vaccine currently being distributed should be very effective if applied early in the season (which means right now).
Posted by Dan Owen at 9:10 AM