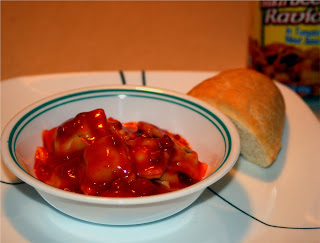 For about eighty five cents in 2013 currency, you can buy a Save A Lot canned brand product by the name of Del Pino’s ‘Mini Beef Ravioli’. On the label of this 15 ounce can is a picture of little beef ravioli’s all simmering in a tangy (it’s assumed) tomato sauce. The ingredient label reads like one of those TV drugs ‘Calmesterol’ (I made this one up) where the commercial spends a tiny amount of time on the supposed benefits of taking the drug ( for a calmer you) before launching into an much more extended explanation of the serious side effects some people (you?) experience when they take it. Seriously, one commercial reads; ‘some users have experienced; nausea, migraines, dizziness and in rare cases, exploding bladders along with other life threatening events’! Yeah, like that’s the drug for me. (Think I'll recommend it to people I don't necessarily like)!

Thankfully, Del Pino’s does not fall into this category. Although it does present some challenges to a health conscious person like myself. From a nutritional standpoint, each can contains about two cups worth of product – that’s 256 grams per serving to you metric people – and you’re getting about 240 calories when you eat it! And, a word of caution here; if what you're eating (be it from a can or from something you recently killed), and the food comes anywhere close to 1 calorie per gram, then watch out, it's potentially fattening! This product falls neatly into that range! Remember, high caloric foods translate into big hips for many of us common folk!

In addition, I noted that the sodium impact, per serving, was a hefty 1100 mg. That’s a lot of salt, and the reason they add so much is twofold; 1) salt is a great preservative and 2) we humans are genetically built to crave it. So, loads of added salt make for a cheap product, that tastes blinking good, stores for about a year on the shelf and which will help us all along the road to higher levels of blood pressure. (You’ve been warned)!

After all those disclaimers were noted, I nuked myself a cupful and would rate the product thusly: Really good and even damn good! This was one of the better ravioli dishes I’ve eaten and it only takes a moment or two to prepare in the microwave! (A busy parent's dream come true)! I’d rate this product a solid 8 on a scale of 10 in terms of taste while giving it a 4 when it comes to nutritional value – The bottom line for me? Something I’ll stock in the pantry for occasional consumption!
Posted by Dan Owen at 8:21 AM