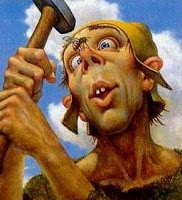 After perusing the internet today, I've come to the conclusion that there exists a significant group of Americans (which I personally label Far Left-Winger Democrats or FLWD's) who are bound and determined to turn over all our rights to the government, and by any means possible! Not only that, but they also seem rather determined to disarm us in the bargain! (I'm guessing they're worried that we all might wake up someday and realize that the Feds have gone rouge on us). And, California, with the recent passage of SB 140 is leading the pack!

In the past, whenever I've tried talking reasonably to a 'FLWD', I've ended up walking away with two lasting impressions – 1) that they’ve been totally brainwashed by the Media and 2) that they'd rather have someone else in control of their lives. (Like a Big Brother perhaps).

Not a single one of these 'useful idiots' can stand up to the pressure of anyone who asks them informed and thoughtful questions. (Under such pressure, they simply get mad and try to make the topic into an emotional issue). As an example, please read up on the California bill SB 140 (which recently passed), and see if you can equate it with this statement by Senate President (Pro-Tem) Darrell Steinberg concerning SB 140.

"Today, each California community is a step closer to being safer," He said. “This swift action by the Legislature and the Governor to enforce the laws we already have is a wise and worthy investment to reduce gun violence."

Wait! Reread that statement again...'laws we already have'?? What he's saying is that they're dumping 24 million tax payer dollars into law enforcement coffers to aid them in enforcing laws that they were supposed to be already enforcing as a daily part of their jobs! Huh? This is what I call a 'feels so good' expenditure of hard earned tax payer money. And, by golly, it must be 'totally awesome' to be a state that's so well off financially (ahem), that they can afford such seemingly redundant actions!

It's a sad comment on the state of this country that we have people like Mr. Steinberg among us. Sadder yet, that they are in positions of power. That's my opinion anyway...
Posted by Dan Owen at 8:24 AM