A micro study of our government at work! 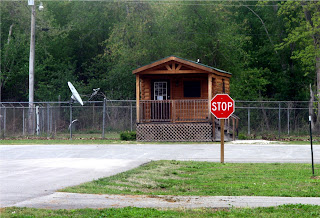 If ever there was a good example of governmental FUBARism on a micro scale, it'd be the Army Corps of Engineers and how they recently responded to a request to slow down traffic in a local park near Forsyth Missouri!

Here's the setup! It seems that some fishermen, in their eagerness to get to the boat ramp at this park would sometimes exceed the posted speed limit of 10 mph! Apparently, this activity was disturbing to other campers in the park, and so a simple solution was embarked upon.

Simple solution: A couple of speed bumps costing a few bucks each would have been quite adequate and would have solved the problem neatly without much ado. (At least, that's how it seemed to me)!

The Government's solution: So, what did the Corps of Engineers actually do? They purchased a bunch of 'stop' and 'yield' signs that they posted all over the park and which, in retrospect, look completely ridiculous! In addition, I'd guess each of the seven signs cost somewhere in the neighborhood of $400 and while they might look pretty, it was amusing to watch the people entering and leaving the park completely ignore them. (After all, even the slowest of those who dwell among us can figure out that the roads in the park are not enforceable by the local police). Duh! So, while I kinda understand this effort, I cannot applaud the expense.
Posted by Dan Owen at 10:22 AM