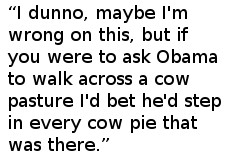 You have to give it to our Prez – he's a man who knows the term 'polarize' very well. I've never seen a Congress so bollixed up as this one is; and led by a man who I'd wager couldn't get two nuns to agree on which day is the Sabbath!

Not surprisingly, President Obama is now deeply mired in three major scandals that would have resulted in the impeachment of any other man; were it not for the incredible nativity of the electorate of this nation. (I'd be willing to wager another bet that more than half the population of the US has no clue as to what this man is doing to the country. Not as long as the freebies hold out at any rate). Actually, in some recent polls that have been run, the figure may be closer to 80%. Think I'm wrong? Try asking ten of your closest friends the name of the Vice President. If more than two know the answer, well then, you're hanging out with an informed crowd.

Now, as the nation bravely marches up to and then quickly on past the 17 trillion dollar debt marker, the only thing supporting this Ponzi scheme of a government is the Fed and Bernanke's mad printing press that running 24/7. When those presses stop, and they will, watch interest rates on worthless money become the standard overnight! Mission accomplished you leftist liberals – the Nation will sink into a civil war that will suit the new monarch Obama to a tee!
Posted by Dan Owen at 9:25 AM