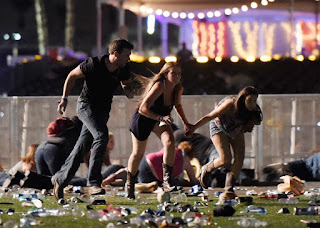 Just hours after the horrific mass killing and wounding of concert goers who were attending a Country Western music festival, the Far Left had already worked themselves into a frenzy, demanding universal background checks, a ban on all semi-automatics among other items of perennial interest. As if that would have stopped a mad man from carrying out his quest for hell on earth.

Here's the facts; the guns were purchased legally and Stephen Paddock passed all the background checks – See Newsweek!

Mr. Paddock was unknown to the police or the FBI as he had only one parking ticket on his 'record'. 'Paddock had no criminal record beyond a routine citation several years ago that was handled in court.' Excerpt from a CBS story!

What is known is that Mr. Paddock did modify some of the rifles to become fully automatic – which is illegal. Mr. Paddock also clandestinely moved the rifles and the ammo into a hotel room which was also against hotel rules.

Finally, Mr. Paddock did cold-bloodily, and in a manner that exhibited careful planning and which required much work be done, well before the first shot was ever fired.... Something is not right here!

What screams out here, to me, is the fact that no sane man would ever have done such a thing – EVER! And perhaps that is what is wrong with my Nation today. We have a porous or wholly lacking mental health evaluation process for those people who would buy guns or other weapons that can kill! As a matter of fact, I would promote new regulations that would not only require gun owners to pass periodic mental evaluations, but which would expand that effort to include any man or woman or child who desires a driver license! A truck filled with explosives could have done a lot more killing in Vegas and had done so elsewhere in the world! Because, Liberals, you see that mental illness has played a strong role in other mass killings and I would not be surprised to see that in play here!

As an aside; I have to wonder how many of our Congressmen could pass even a rudimentary mental competency test, if one were given ?
Posted by Dan Owen at 9:33 AM