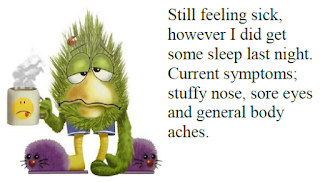 Monday, October 2 - Last November 3 (3026)  , I got my flu shot with no ill effects. This year (2017) I got a shot on Friday September 29,  with the same four inactivated viral components (2 type A and 2 type B), but was sicker than a dog just two days later. (My symptoms included a sore throat, sore joints, fatigue and a dry cough). Pretty much text book symptoms for someone with influenza.

The real test, however, will be just how long the 'illness' lasts. A bout of real flu typically lasts one to two weeks, with severe symptoms subsiding in two to three days. However, weakness, fatigue, dry cough, and a reduced ability to exercise can linger for three to seven days. Therefore, I figured if I was still sick by Wednesday, I just might have gotten the real thing. Otherwise, it was likely some other 'bug' that was floating around. And then again, the problems could be due to a reaction to the quadrivalent vaccine I'd just recently received. I've since concluded that I have the real deal...
--------------------------------------------

My anxiety was only increased with this news coming out of Australia:

That’s a 156% increase on the number reported by this time last year, according to Immunization Coalition statistics. And the health service believes the number is even higher, with a delay in reporting thanks to administrative backlogs as officials struggle to handle the spike.

The rates of influenza are highest among people aged 85 years or older, with a secondary peak for children aged 5 to 9 as well as unusually high rates among under-fives.

Update: Day #4 and I think I'm getting a little better - At least I've managed to get out of bed a few times. This 'flu', assuming that's what it is, has been a real SOB. Look up the list of symptoms for influenza and I've had them all over the past few days...