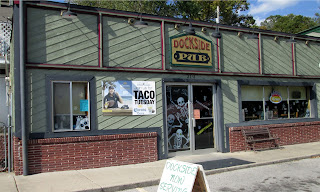 Rockaway Beach MO. - After hearing that a good friend of mine had just started working at the Dockside Pub & Grub located in the center of Rockaway Beach at 2718 State Hwy 176, I decided to stop in and check the place out. (After all, it had been a number of years since I'd last been in the area). And, back then, the venue had a less than savory reputation... Well, that's changed big time! 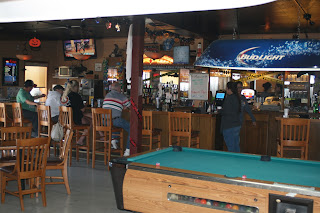 Ever since August of this year, it has been under the new ownership. Fred Hoffman, a local entrepreneur has assumed control, and I had to admit I was rather impressed when I entered the establishment and ordered a beer. Clean, warm and friendly were my very first impressions! My friend Brandy was also working that afternoon along with another professional named Brenda. The establishment, (which can seat about 80 customers), was well appointed with a well laid out arrangement of bar stools and tables where hungry customers could enjoy a variety of prepared foods (including a signature 1/3 pound hamburger and French fries)! There were also two pool tables, a jukebox and a stage with a dance floor. Very cool indeed!

Brenda filled me in on a few of the almost daily happenings that included Friday ladies night, upcoming pumpkin carving contest and a Halloween contest that offers cash money to the top costume. I had the impression that this was really nice venue that was well run and would be a good hangout for anyone at any time. I was also told that the Rockaway police looked kindly towards it patrons as long as they behaved in a responsible manner and obeyed all traffic laws. Well, perhaps things are changing for the better in Rockaway Beach and we may have new owners like Mr. Hoffman to thank for that! Oh, and at Happy Hour - (2PM?) draft beer is only $1.75!

I plan to make the Dockside Pub & Grub a frequent destination!
Posted by Dan Owen at 5:41 PM