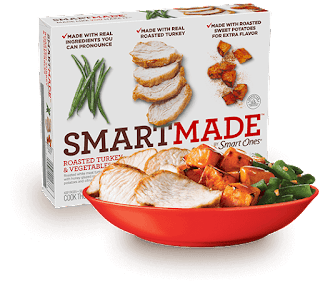 At about $3 and a half bucks, the Smart Ones folks, ( a Kraft-Heinz company) latest creations called SmartMade meals are not to shabby! They offer about 19 different combinations of which I tried their Grilled Peppercorns Beef and Vegetables about a week prior. It was a 'bowl' type deal with strips beef mixed in with 'oriental-styled' veggies in a sauce resting on rice. When I nuked it up, for the first time, I had my doubts. Those were quickly put aside, however, after just a few minuses of eating. The blend of separate tastes was inspiring and I even felt fairly satisfied. No small feat in a 255 gram – 260 calories frozen creation!

So, as I was then somewhat hooked, I went back to the local grocery store on a cloudy November day and quickly selected the Roasted Turkey and Vegetable item from the frozen food shelf. This 240 calories meal was advertised as 'Roasted white meat turkey medallions with honey glazed roasted sweet potatoes and citrus green beans'. That sounded pretty good to me, and so into the shopping basket it went!

Now, anyone who would bother to read the nutritional label would be hard pressed to find anything that was out of line. This is a low cal, low salt and low fat meal a deal! What's more it delivers a decent carb-blast that doesn't really overdo it at just 36 grams! (I was in awe and also a little doubtful as it is very true that in the world of food the better the nutrition, the more many of us will run the other way – It's like a carrots versus French fry kind of deal).

The directions to make are simple. It's one of those vent-nuke-stir-cover and nuke again kind of prep deals. I have no problems with that and in short order a steaming tub was on the table before me. And yes, I generally eat right out of the plastic container as it saves dirtying up a dish and I can do pretty much what I want anyway.

As I motored through this repast, I found everything to be just OK. Not great. To add to my displeasure there were all those sweet potatoes, which I couldn't quite wrap my head around. I'm more of a regular potato kind of guy, but soldiered on. Overall, a mediocre experience, and whenever they get around to using regular potatoes, call me!
Posted by Dan Owen at 5:15 PM

Email ThisBlogThis!Share to TwitterShare to FacebookShare to Pinterest
Labels: 5 out of 10, Critique, Forsythkid, opinion, Roasted Turkey and Vegetables, Score, SmartMade