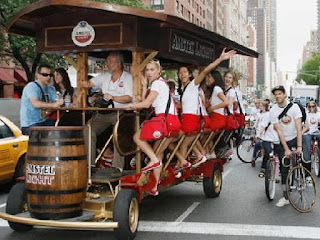 AMSTERDAM – A ban on group-powered pedicabs that are popular with inebriated tourists and stag parties has taken effect in the busiest sections of downtown Amsterdam.

The ban on so-called "beer bikes" kicked in Wednesday, a day after a court rejected arguments from four operators that the prohibition promoted by the Dutch capital was too drastic. The Amsterdam city government says the contraptions are a public nuisance.

The pedal-powered vehicles resemble small trailers more than bicycles and are configured to work as bars on wheels. Passengers sit around a table on stools fitted with pedals and trundle around the city while they are served beer and other drinks.

Not to be discouraged, I took the bull by the horns on this issue and have sent Mayor Bill de Blasio a proposal that New York City take up the cause and resurrect this time honored tradition in his fine city! After all, I reasoned, the place is already full of drunks and other assorted rowdies... What could go wrong?
Posted by Dan Owen at 12:12 PM