Empire Electric jacked up rates in May and I missed it! 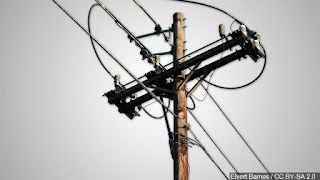 JEFFERSON CITY, Mo- The Missouri Public Service Commission has approved a request filed by Empire District to change the fuel adjustment charge (FAC) on the monthly bills of its electric customers back in May 2018.

As a result of this filing, the FAC for a residential customer using 1,000 KwH (kilowatt hours) of electricity a month will increase by approximately $5.74 a month, from approximately $1.84 a month to approximately $7.58 a month. The change is expected to take effect on June 1.

My thoughts: Just as in the convoluted and twisted tax structure we all live with, so does our utility companies have the ability to jack its customers up whenever the mood strikes them. Oh, and the money goes to the Canadian owners not to workers in the US. Yes, the taste of free money is intoxicating, isn't it? My opinion.
Posted by Dan Owen at 9:05 AM