Enjoying pasta even while dieting! 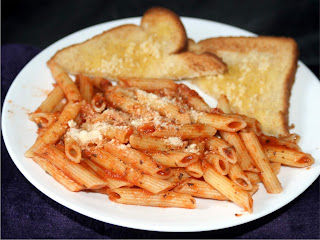 For anyone who has had to go on a diet, I would agree that it can be tough! Food  that you might really like, as in potatoes, pasta and bread are generally included on the list of stuff you can't eat!

In my case, I look at all foods mainly in terms of just two factors; carbs and calories! If you can reign those dudes into some semblance of reason, then any diet you might try, will likely be successful. The carbohydrate intake, in particular, needs to be monitored very carefully. (I try for less than 160 grams per day). Note that going below 50 grams can throw your metabolism into a state of ketosis. A potentially bad thing for you to find yourself in - see this article for more.

As you can see in the picture above, that's a whole lot of pasta with a simple meatless tomato sauce! And is that garlic bread? Yes. I'm guilty on both counts. But at 277 calories (290 with the Parmesan and red wine I added), this was still a very can do lunch! After having a bowl of oats for my breakfast with half a cup of milk, I had a good idea of what I could enjoy for afternoon snack and dinner!

Following was the entire day that followed. Note that I was able to reserve calories for those inevitable late night snacks....