A permanent base on the moon! Is that really needed? 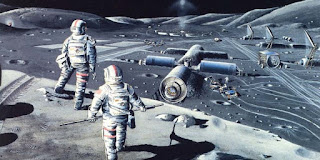 A recent article by Space.com titled 'NASA Chief Wants to Send Humans to the Moon - 'To Stay' caught my interest. It was a lament on how the United States perhaps missed an opportunity. NASA administrator, Jim Bridenstine stated, “When you look back at history, look back at the end of the Apollo program, 1972 when we didn't go back to the moon... you look back and there was a period of time there after Apollo and before the space shuttles when we had a gap of human spaceflight capability," Bridenstine said. "And then you go forward and look at the retirement of the space shuttles in 2011, and now we're getting to the point where we're ready to fly commercial crew. We've got a gap of about eight years in our ability to fly crew into space.


"When we think about the [end of the] International Space Station, we want to make sure that a gap doesn't materialize," he said. "I believe it is important to do everything in our power to prevent another gap from occurring and that is why it is important to start this conversation now."

I fully agree with Mr. Bridenstine. I believe that having a permanent moon base will become of great strategic geopolitical importance, in the years and decades to come. If you question that statement, just imagine Russia or China with a base of their own up there... right over our heads...

Some time ago, I wrote a tongue-in-check blog called Welcome to Mooneyville.  Perhaps getting a few convicts up their, as a cheap labor force, might help reduce costs!