Holy moley, today I’m going south of the border a do a a critique of the final TV dinner of the trio I bought for only .77¢ each. At the end of this blog, I will then rank each on taste, visual appeal and nutrition. Should be very interesting, so stay tuned. 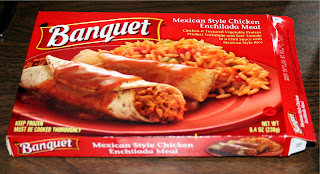 Up to this point, I’ve survived eating both the Chicken Nuggets and Fries meal deal and the Spaghetti and Popcorn Chicken entrees. I feel that I have been objective and fair with both and I’m still living. But now, I am faced with a TV dinner where the chicken is actually hiding out somewhere in the package. I believe it’s in the Enchilada but can’t prove it. Thing is you could put almost any kind of meat in there and no one would be the wiser! People from Mexico routinely eat this stuff and just look at the guy in the picture above. Scary! If I ran into someone that looked like he does on the street I’d call 911. Anyone ever watch those old spaghetti westerns where they’d show a deserted Mexican town with just a dog or two slinking furtively from shadow to shadow. Ever wonder what they’re so afraid of? Hmm? Well, no matter where the source of the protein may come from, I have promised myself to partake of this meal objectively.

The instructions for this .77¢ wonder indicated that I should only just slit the film over the rice and then nuke it for two and a half minutes on high. Next, I was then to ‘spoon sauce over the enchilada and tamale’ (hey! Where did this come from?), and then to stir the rice! After replacing the film cover, I was then to nuke this for an additional 2 minutes. 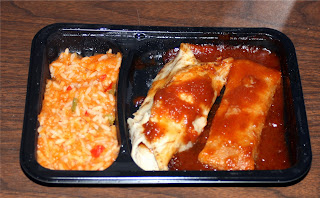 While I waited for my ‘south of the border’ meal to cool. I checked out the nutritional label. For 238 grams of food I was taking in 280 calories, 790 milligrams of sodium and 45 grams of carbohydrates! Saturated fats were 2.5 grams. Once again, the sodium is through the roof!

In spite of everything, this was most assuredly the best of the sad litter. While it tasted very salty, I found the meal to be strangely satisfying. Maybe I’m falling under the Banquet spell! So what did I think about all three? Which one was best? Actually, they all failed with the exception that if I had no other choice I’d stick with the Mexicans. The Chicken and Fries and Spaghetti dish are just pure road kill.