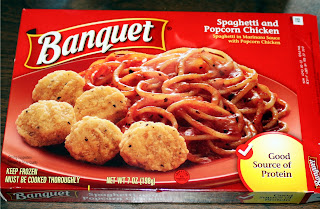 Oh no, not another Banquet cheapo dinner review! Yes, you glutinous nabobs hiding out there in the blogosphere! Here's my unbiased lowdown on another buck a meal deal.

In case you might be wondering, yes, I am working my way through the entire line of .77¢ (now a buck with inflation) dinners offered by Banquet. A fine Omaha,Nebraska company that makes TV dinners for us downtrodden masses. This time I will be feasting on the Popcorn Chicken version with spaghetti instead of the ‘Nuggets and Fries’ deal from before.Note to self: these two meals are not similar. Each deserves a place of its own on the bottom of the culinary barrel.

Because I would be working with spaghetti instead of French fries, the directions were a little different. Instead of ripping off the entire film from the package as before (a true macho feeling for me), I was instructed to gently remove only the film from over the popcorn chicken. Then, surprisingly, they requested the chicken bits get the boot also! The spaghetti remained covered. Can you say gitzy? Not sure what I was supposed to do with the popcorn things. I just left them on a plate.

After nuking the package in the micro for a minute and a half at high, I got to… you guessed it, stir the spaghetti and was then instructed to replace the chicken whatchamacallits. The instructions called for another nuking lasting a minute and a half. I'm assuming this is to make sure everything is actually dead. 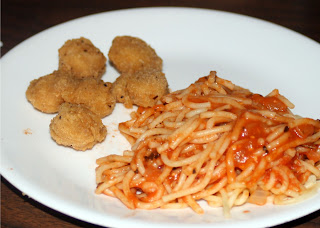 OK, the deed has been done. I let the meal sit for a minute. And, rather than eat directly from the tray, I elected to plate the meal like a chef would at some fancy restaurant. (Hey, fancy is as fancy does). That accomplished, I gripped my fork in Roman fashion and dug in like a gladiator.  Hmm, the chicken tasted a lot like the chicken in the Chicken Nuggets and Fries meal only they were smaller in this one. And they were really, really spongy and therefore really disappointing. It must be all that breading. (Note to self; send Banquet a heads up on their spongy breading). 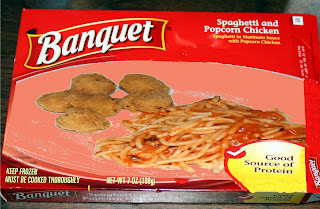 Being a super culinary trooper, I made the effort to eat every bite. The spaghetti tasted just so-so. The chicken, however, was like gnawing on the severed toes of a not so fresh cadaver. Gag me. But, OK, let me get real. It was not really all that bad for a measly .77 centavos (or about a buck in 2015). And who cares that the calories peaked at 270 or the sodium at 470 milligrams or the saturated fat was an artery clogging 3.5 grams? Who cares? Wait! I think I'm getting heart palpitations... Score this one a 5 and please move on to something a little better.
Posted by Dan Owen at 6:29 PM