A Critique of Banquet’s Chicken Nuggets and Fries 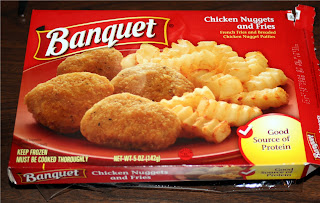 It was a slow Thursday night and I found myself looking in the fridge for something to eat. I was hungry, but then again, I’m always hungry. I wanted to make something hot, filling and most important, it had to be fast and easy (just like my women). A true American end-of-the-day cuisine for those of us who can’t cook and who love beer...which is most of us. (Hey! It's a male thing).

As I perused the freezer, my wandering eyes were attracted to a pile of TV dinners I had purchased a few days earlier. Now, even though I’m on a sub par fixed (meaning zero) income, I still maintain enough personal essence to purchase only the best in frozen entrees. In this case, it was a Banquet Chicken Nuggets and Fries dinner. Banquet is a household name all across the world, isn’t it?
So anyway, the picture on the package was pretty enticing. As you can see, some sumptuous chicken nuggets nestled next to a pile of French fires. Wow! Looks like more food than I could eat all by myself! (In all fairness, the cost of this feast was a mere .77¢ which should have warned me not to expect too much). With my mouth, now watering, I opened the box…. 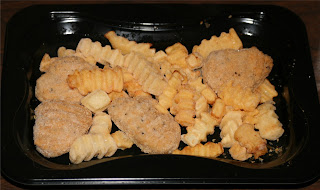 Hmm, seems there might be a problem here Houston! The tray was so small. Not a meal at all. It didn’t look much like the picture, but OK, I decided to soldier on. Into the microwave it went after first stripping off the cellophane film cover as per instructions. One minute on high, and then I stirred the contents with a fork prior to another minute of nuking. While this was going on, I hummed the Star Spangled Banner...twice!
After removal from the oven, I tried to arrange the contents as closely as possible to what I saw on the box. This was futile as it turned out. As I attempted to move the chicken nuggets, I noticed they felt a bit soft (like my head). I had the feeling there was more breading than meat. (It turned out, I was right on that score). The fries were also a little more mushy than firm. (Reminded me of an old man’s penis. Not that I have a problem in that area mind you)! 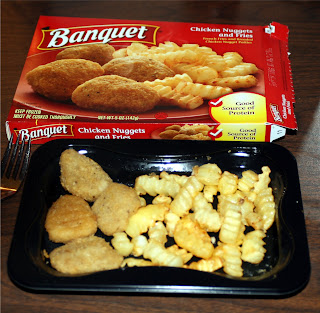 I ate this stuff anyway. After all, I had paid almost a buck for it! As I ate, I took a look at the nutritional panel. (As you might have guessed, I don’t have a lot to do). I quickly gathered that, for such a small meal, it sure packed a lot of calories and salt. At just a 142 grams in total weight, I was still getting slammed with about 280 calories not to mention 560 milligrams of sodium. Wow. Kind of a kick in the groin for anyone trying to diet or maintain a low salt diet.
But, for all that. It tasted OK and I promised to make up for this dietary transgression on the morrow by eating a salad. Well, maybe.
Posted by Dan Owen at 7:46 PM