Invasion of the winged ticks! Part 1

Part One – A chance encounter 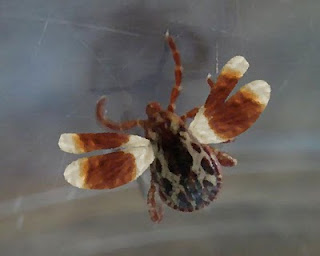 I’m not sure of the exact date I first noticed the tiny bugs flitting around my room. I remember thinking they were some kind of weird fly. They were way too small to be a regular fly. My mind then went on to more important topics. Like where to find a job! I do recall that they were much smaller than the ones that normally invade homes here in southwest Missouri and then went on to other things. Little did I realize that in a sense, I was probably one of the first to lay eyes on what was soon to become a nightmare plague that would cripple the world.

Five years ago, when I moved from a small apartment in Chicago (the windy city that I felt actually got its name more from the politicians than from Lake Michigan), I finally landed in a small Midwestern town named Birch that supported a population of just under two thousand. After looking around in vain for a job, I soon discovered that most of the people living there worked in various trade jobs such as construction, roofing and the like. Positions I was ill suited to fill. A few of the places I sought work at mentioned the National Research Institute that occupied the far north edge of town as a potential candidate. NRI as it was known by the locals was very clandestine but occasionally they were known to post a help wanted sign by the road that ran by the min entrance. No one, including myself, really had much of an idea what went on in the small cluster of nondescript concrete buildings. We could see that the parking lot there was most always full from 7AM until late into the evening. And, there were rumors, of course. Some said they tortured animals while others hinted at even darker experiments. A friend of mine confided to me that NRI was actually involved in genetic research. Turned out he was the closest guesser of the group.

I really didn’t care much what they did and never went over to apply for work. Interestingly enough, I also never ran into anyone who worked there in the town proper. Even on the weekends while shopping at the local grocery, there was no evidence of strangers in my mist. (I would have remembered seeing the blue coverall’s that NRI employees were required to wear). Maybe they all did their shopping late at night or maybe they shopped in the next town? Strange behavior, but not illegal. So, it was with some shock that a chance encounter at the mart one weekend made me aware that things were not all that perfect in the little town of Birch Missouri.

On that day, a Saturday early in the springtime, I was at the mart looking for the section that held insect repellent. After wandering around for a while, I spotted a friend standing at the far end of an isle. He evidently was also looking for repellant as he was holding a can of what appeared to be Off. “Hey Ted” I announced as I walked up to his side. “That’s just what I was looking for. The damn bugs are absolutely thick this year and its not even summer yet!” I commented sagely as I picked up a can at random. It announced ‘Insect Away’ in big blue lettering and was evidently on sale.


Ted looked over at me and scowled. “Hey DanO! No, don’t get that junk. It don’t work buddy.” He grinned and pointed to his left leg. “See those red spots?” I could just make out a cluster of tiny red marks on his calf. “That happened after I had applied the Insect Away crap! Just a short walk in the woods yesterday and BAM it get clobbered good” He then pointed to the can of Off in his right hand. “This here is the real McCoy according to the store manager. He said that while it costs more, it’s worth it because it works!”

As I eyed the cost difference, I had internal doubts. If the guy Ted was referring to was someone named Mark Billings, then all bets were off. Old Mark barely got himself through High School a few years back when he landed a job at the mart. He actually was a stock boy, but told his friends he was the manager. Nice enough kid but certainly not much in the way of an expert on bugs. Personally, I have been long convinced that most of what you pay for these days is hype and not actual product. But, I was willing to part with a little extra on the basis of Ted’s glowing endorsement. I replaced the Insect Away and grabbed a can of Off and headed for the check out counter waving adieu over my back to Ted as I went. That was the last time I saw Ted alive.

End of part one….