Iran's actual location in the world at large! 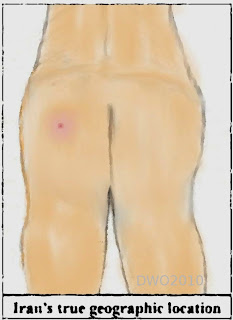 After an extensive search in Google Maps, I have determined that Iran is not where I thought it was all these years. Seriously!
No, after seeing how the government mistreats its citizenry and I then considered the hatred, bigotry and outright lunacy of the leadership, I’ve determined that Iran is actually an infected pimple on the butt of an otherwise decent world.
This pimple has been around for some time and I expect that if left to its own devices, may eventually become an abscess that would threaten healthy tissues around it.
As one who plays doctor in his mind, I would recommend lancing the pus filled pain in the ass before other little pimples, close to it, get some ideas of their own.
Posted by Dan Owen at 4:44 PM