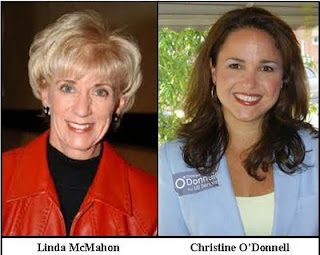 As the senate races in key states begins to heat up, it's amazing to watch the spectacle that the Democratic and Mainstream media are making of themselves as they are throwing everything, including the kitchen sink, at candidates they are either running against or don’t like.

Republican senatorial candidates Linda McMahon in Connecticut and Christine O'Donnell in Delaware have been the targets of increasingly accusatory comments by both far left zealots and by media outlets such as the Washington Post and the New York Times. Failing the ability to discuss actual issues (the Democrat's well has run dry on that score), they have resorted to comments like ‘loon’ (Washington Post) and ‘seedy’ (New York Times) when referring to these two female candidates. Surprisingly, few voters seem to be paying much attention to either as time winds down to Election Day.
The Democratic Party has suffered what many now feel is a mortal wound and could well fade from the political scene over the next few years. The extremist media is already fading as more and more voters are looking for the truth and not hype when it comes to who will be placed in positions of leadership. My thought. 'Bout time!
Posted by Dan Owen at 12:42 PM