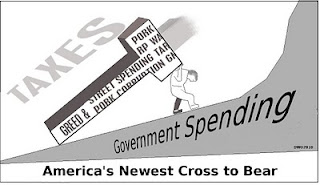 With a daily interest bill of 1.2 billion dollars, our government must now resort to printing money with absolutely nothing to back it. They’re also running out of pockets to move funds from and to.

Foreign nations that have been floating the US a line of credit to the tune of over three trillion dollars have finally begun to wise up. Countries like Japan are becoming increasingly reluctant to hold our currency as they face problems of their own. The result may likely bring increasing pressure on President Obama to find some relief through increased taxation at all levels of our economy. This may take the form of taxes being raised on certain via a VAT or Value Added Tax. Other taxes being considered are a Gas Tax, an increase in cigarette taxes, the so-called Obesity tax on soda, capital gains taxes and well, you get the idea. Every day, new tax codes and regulations are being added daily to the current Federal Tax Codes which encompasses over 71,684 pages. As I speak, the Feds have already passed a tax increase on tanning Spas which amount to 10% per customer per visit. Get ready America, the shit is about to hit the fan!

While the future of America is looking grim, Capitol Hill doesn’t look the least predisposed to change things. Even when almost every expert on the economy has agreed on one point. That the US Governments spending must be slashed by at least twenty percent if we are ever to get out of the hole we find ourselves in. And this would BE IN ADDITION to massive cuts in entitlement benefits such as Social Security, Medicare and Union pensions. There will be very few citizens who will not have to make some large sacrifices and let me add that the process will be painful. The real issue right now is that these drastic actions must happen soon, as the clock is ticking on the massive 13 trillion dollar debt each and every day.