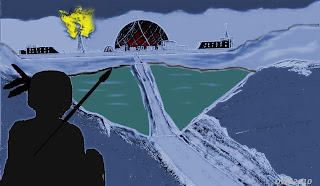 In looking back. Way back, to a time when the North American Continent was mostly empty of human life forms. When America was occupied by scattered Indian tribes. Tribes who were nomadic by nature and who moved with the herds of bison. Animals that supplied most of their needs and which are now a novelty. When America was a virginal country full of pristine forests and fields. When a man could drink long and hard from a stream that would quench his very soul. When… Well, I’m sometimes a little shocked to see just how far backwards we have moved in two hundred short years.

To say that America is rapidly becoming an armpit would be perhaps to be too kind. Homo sapiens should really be shortened to Homo saps and it's way past time we woke up.

Today, drinking untreated water from any source can be a deathtrap. (Really fresh water comes in little bottles at $2 a pop). Our forests are dwindling and the animals that dwell within are under constant pressure of extinction. Even the air we breathe has become routinely tainted with hydrocarbons and filth. (If you want to see the difference, hop a plane to Canada). All the while, we continue to reproduce like rabbits in numbers that would not be permitted by any other sane species. Yes, America is fast becoming a true cesspool and one that literally stinks. The saddest cut, however, is that we still look like a pretty good place to live when compared to most other countries!

While our government continues to wrangle over which party will be in power next term and where best they can spend money we no longer have, we have somehow squandered all that is really important. Faith in God has been replaced with faith in machines. Friends that used to gather around a fireplace, now sit hunkered in front of a computer screen. They text each other now and if they really like you they put a smiley face at the end of a sentence. Churches have become ever more a commercial interest and not a house of God. That is for those that actually attend church. The rest of us Godless wonders sit slack jawed watching the nightly news while we plot on how to screw our neighbor. Yeah, we’ve come a long way.
Posted by Dan Owen at 11:47 AM