That was one fast end to the oil spill! 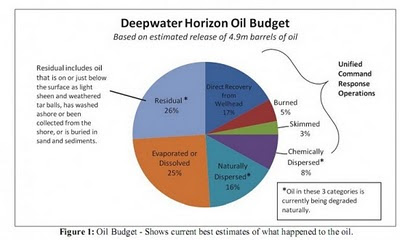 Just weeks after the oil spill was stopped, so too did coverage by the major media outlets. I’ve observed just a few from time to time now. The latest was on Fox News when they briefly discussed efforts being readied to remove the BOP so it can be inspected. Little or no coverage concerning what happened to the estimated 4.5 million barrels of oil that gushed into the sensitive Gulf region. Likewise very sparse coverage as to how the clean up is proceeding.

The best information I’ve come across is the chart pictured here that addresses what is thought to have happened to all that black crude. It would seem that most of it has either disappeared or has been eaten by hungry bacteria. (So, what’s happened to all those bacteria)?

Well, perhaps Mother Nature in the form of a hurricane will once again launch everything back into perspective. Tropical Depression Nine, now just off the coast of Africa (and which will be named Gaston if it strengthens) could easily become a player as it is already south of three previous storms (Danielle, Earl and Fiona). It would both tragic and amusing if it hits New Orleans. I can just picture President Obama, in my mind, strutting up and down a Gulf beach with hands on hips and looking presidential. All the while, with dark clouds billowing on the horizon. Oh no! It’s Katrina II the sequel.
Posted by Dan Owen at 12:56 PM