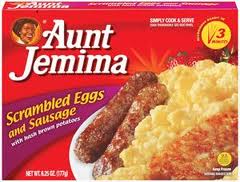 I  love the folks in the Pinnacle Food Group Marketing Department who make this line of Aunt Jemima products. They sure know how to make stuff look good on the package. Too bad the reality can be a bit disappointing. Still, you never know, maybe this time the taste will be awful awesome!

Before preparation, I sneaked a peek at the nutritional panel in the hope that there would be some redeeming qualities hidden there. Sad to say, even at a buck or so, this puppy is a bit lacking. While you do get a decent jolt of calories at 290, you also get walloped with high amounts of cholesterol and salt. The 385 milligrams of cholesterol is 128% of the recommended daily allowance and the salt, at 930 mg, is an outright assault on anyone who is trying to restrict their sodium intake. Once again, we have a company that understands it can disguise a products lack of good taste by the addition of a pant load of salt. While that works great as a culinary disguise, there is so much salt in this meal that doubt it really needs to be refrigerated to keep it from going bad. (That said, I’d also be willing to bet that if they reduced the salt by just half, the end result would still be rejected by the family pooch).

Speaking of taste! I’ll categorize this one as so-so no-go fare. Nothing to write home about. The eggs were bland (grainy) and the sausages a little turgid and greasy. The hash browns were just plain underdone. (Personally, I've found that a shot of Tabasco sauce on the eggs did help a lot as does some A1 Sauce on the hash browns).

My overall grade for this meal is a C- or a Score of tolerable whenever there is nothing else around.
Posted by Dan Owen at 7:48 AM