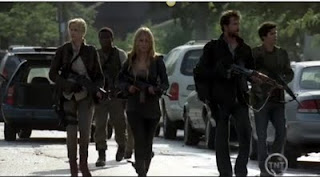 FALLING SKIES opens in the chaotic aftermath of an alien attack that has left most of the world completely incapacitated. In the six months since the initial invasion, the few survivors have banded together outside major cities to begin the difficult task of fighting back. Each day is a test of survival as citizen soldiers work to protect the people in their care while also engaging in an insurgency campaign against the occupying alien force.

At the center of the series is Tom Mason (Noah Wyle), a Boston history professor whose family has been torn apart. His wife was killed in the initial attack, and one of his three sons has been captured. Determined to get his son back and to ensure the safety of his other two sons, Tom must put his extensive knowledge of military history to the test as one of the leaders of the resistance movement known as the 2nd Mass, because of their location in Boston, Mass. They are constantly trying to gain intelligence about the aliens in order to one day outsmart and overtake them and hopefully rebuild their lives. See the series opener here!
Posted by Dan Owen at 7:52 PM