If water suddenly got hard to find! 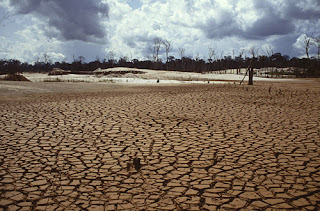 Water, for most Americans, is just a turn of the tap away. It’s something we all take for granted, until it’s suddenly not available, that is. And, that’s not and if actually, but more of a when…
Each and every person requires water in order to live. While we can all go without food for a while, lack of water can put a person in the grave in a matter of days. We each need a minimum of 8 cups or about 2 liters a day to replace what is lost through normal respiration, urine and bowel movements. That’s a lot of water when you think about it. A family of four, then, needs at least two gallons on hand each day. More, if they are exposed outside, the weather is hot or they are exerting themselves. So, what would happen if some area disaster cut off the flow of water for a number of days… or even weeks?
Consider, if you would, what would happen if a terrorist action poisoned the entire water supply of a community to the extent that none would be available for some time. Where would you go to even get some water? No doubt, the stores around you would be stripped clean of anything drinkable in the first day or so. (My first thought would be to run to the store for cokes and bottled water). Once that supply was exhausted, you would be left to your own devices until some form of help arrived, which could take days or even weeks.
With no easy source of water available, you would have to scrounge for it. You might ask neighbors if they had some, (a plan that just might work out well for the first few days anyway). Or, you might want to strike out and locate a nearby stream. A sensible idea since streams can be found just about everywhere unless there is a drought ongoing. So, armed with some containers and pots you go out and secure a supply to take home with you. There are containers that are specially made to carry water in bulk and you might want to consider purchasing one. Now, the question becomes how to purify it so it’s safe to drink.
Boiling always works!
The best method to treat water is to first strain it and then boil it. Filter the water through something like sterile cloth or even coffee filters to remove any large debris and then fill a pot on the stove and bring it to a rolling boil for about two minutes. Cover and allow the container to cool. Voila! You now have fresh water on hand to consume at your leisure.
Purify it with Clorox! 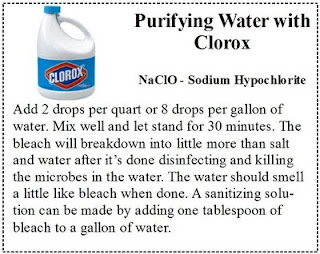 The second best method is to first filter the water as before, and then add two drops of Clorox bleach for every quart of water you process. For this an eye dropper comes in very handy. Bleach is actually sodium hydrochloride and after being diluted in water and left to stand for about thirty minutes will break down in to table salt and more water. So, add the bleach, still well, cover the container and allow it to sit. I mention Clorox specifically as you want to add bleach and only bleach. No softeners or other additives. Cut out this label and affix it to a bottle of bleach to which you have taped an eye dropper and you’re all set!
Either of the two methods described above will kill most everything in the water and make it safe to consume. Just make sure to renew your supply of bleach every three months or so to keep it at peak effectiveness.
Posted by Dan Owen at 10:22 AM