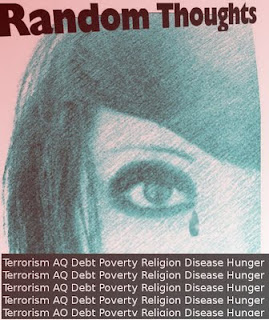 Is it hot enough for you yet?
With temperatures expected to crack the century mark by a good margin for the next week or so, some climate enthusiasts are asking where the hell Al Gore is. Surely it’s time for at least one victory lap before we all turn to toast!
Train Track Therapy! Myth or Fact? 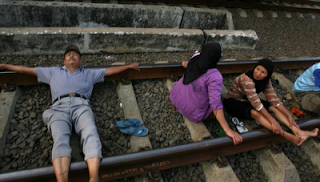 Ignoring the red-and-white danger sign, Sri Mulyati walks slowly to the train tracks outside Indonesia's bustling capital of Jakarta, lies down and stretches her body across the rails.

Like the nearly dozen others lined up along the track, the 50-year-old diabetes patient has all but given up on doctors and can't afford the expensive medicines they prescribe. In her mind, she has only one option left: electric therapy.

She leaps from tracks as it approaches and then, after the last carriage rattles slowly by, climbs back into position.

Pseudo-medical treatments are wildly popular in many parts of Asia — where rumors about those miraculously cured after touching a magic stone or eating dung from sacred cows can attract hundreds, sometimes thousands. What?

My question is, will this catch on in America? I kind of doubt it!


Tar babies again in the news!
A House Republican apologized to President Obama for saying that being associated with Obama's policies would be like "touching a tar baby."

Rep. Doug Lamborn, R-Colorado, made the remark last week to a Denver radio show. Lamborn told KKTV on Monday night that he did not know the phrase had a racial connotation. Really. Neither did I! Wonder if he had read my blog entry; “Brer Rabbit and the Congressional Tar Baby”?
Posted by Dan Owen at 1:44 PM