What is the Tea Party? 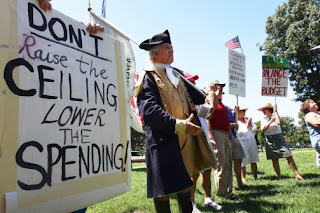 The Tea Party movement is a grassroots movement of millions of like-minded Americans from all backgrounds and political parties. Tea Party members share similar core principles supporting the United States Constitution as the Founders intended, such as:
•  Limited federal government
•  Individual freedoms
•  Personal responsibility
•  Free markets
•  Returning political power to the states and the people
As a movement, The Tea Party is not a political party nor is it looking to form a third political party any time soon. The Tea Party movement, is instead, about reforming all political parties and government so that the core principles of our Founding Fathers become, once again, the foundation upon which America stands.
Posted by Dan Owen at 10:27 AM