Islam: Making a difference in the world – one body at a time! 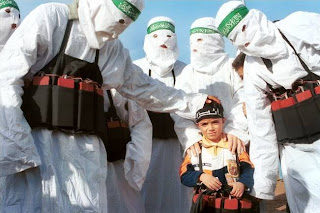 I read with sadness about the loss of so many fine soldiers in the NATO helicopter that was due to a ‘lucky shot’ by a Taliban extremist. The war in Afghanistan has gone on for more than a decade now and if allowed to will go on for another decade. Maybe it’s time we tried something new.
There is no doubt in my mind that the west will never convince this group of hate mongers that we can co-exist peacefully. Like in the movie Independence Day, when the President played by Bill Pullman asked the alien, “What is it you want us to do?” To which the alien responded, “Die.” It’s the same thing here, only the words are coming from a fellow human being and not from some nightmarish creature.
Yet, maybe that’s what this religion is all about. Perhaps we should admit some individuals are simply beyond any form of logical thought, emotion or feeling for others like themselves. Perhaps even among us humans, there are some true Aliens.
Posted by Dan Owen at 12:51 PM