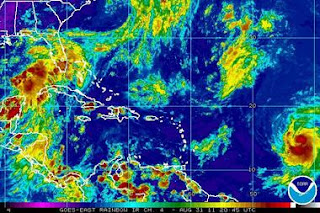 August the 31st - Say it’s not true, but had Katrina not been such a baddie that the weather folks retired her name, this storm would have been called…you guessed it Katrina.
This afternoon, at around 4PM CST, the tropical storm system was still churning around in the Central Atlantic. Her maximum winds have reached 70 mph and she is moving WNW at about 20 mph. It’s a good bet she will be a Category One system by later this date. From there, no one is absolutely sure of her track. 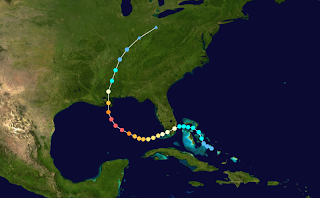 Looking back to August 2005, the original Katrina’s path as she approached the US in early August, looked odd at best. And, when you get right down to it, her birth was also something of a fluke.  Hurricane Katrina first formed as Tropical Depression Twelve over the southeastern Bahamas on August 23, 2005 as the result of an interaction of a tropical wave and the remains of Tropical Depression Ten. Kind of a two fer deal. So, her birth was not without some help. That was on August the 23rd in 2005. Then, a few days later she crossed the southern tip of Florida as a Category One storm causing some destruction as well as a few deaths. After that she moved into the gulf and the rest is history. As a category three when it made landfall in the gulf, Katrina became only the fifth deadliest hurricane in the history if the United States.
Will this new depression attain the heights of suffering caused by Katrina. Hopefully not. The odds makers right now predict this storm will re-curve harmlessly back to the mid Atlantic. Still, it makes you wonder. This storm has a history attached to it for better or worst.
Posted by Dan Owen at 5:28 PM