America needs a way out! 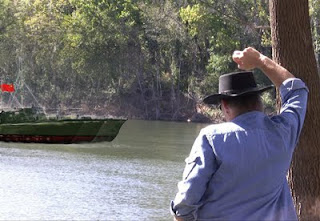 While reading this it wouldn’t hurt to play Waylon Jennings & Willie Nelson’s - Just To Satisfy You ! A song about how someone’s gonna get hurt before we’re all through. Perhaps surprisingly, I think that someone is gonna be China and I think it’s gonna be soon!
This country is hurting right at the moment. We owe a whole bunch of money to people that not only dislike the West, but who have been taking advantage whenever and wherever they could. The Fair Trade Act we signed lo these many years ago appears to have been heavily slanted in China’s favor while trying to force the US to directly compete with thirty cent an hour Chinese workers. That didn’t turn out too well, did it?
Now a trillion and some change later, a very large portion of our industrial might has moved on over there where, surprise, we’re still getting screwed and tattooed! China keeps getting stronger while we keep getting weaker! Or, is that really going to be the case? What would happen if we decided to default on that money? Hmm.  Moral one – don’t let a foreign power sucker you like that again because it can spark a very nasty war!
Next, we have troops deployed all over hells creation. Some of whom have been stationed in countries, like Germany, since I was but a mere lad. We’re constantly fighting wars and protecting other countries borders while allowing our southern border to look like a sieve. All this at a cost of (wait for it), trillions of dollars. Moral two – bring em all back and let our neighbors work out their own problems. Place these troops on our southern border, if you have too, and enjoy the effect.
Finally, for so very long now, we have been sucking at the oil nipple of countries that really dislike us. Countries that would like to see America get hurt in any way possible. We’re on the hook to some of these folks for much of our energy needs and one of these days, they may just decide pull that chain around our necks…hard! Moral three – drill baby drill! (Sarah you might just yet have your day)!
Three morals and three things we need to learn from them. It’s not too late America! Please consider sending this, or your own message, to your Federal representatives. Do it soon, however America, or we might have to start learning to speak Mandarin.
Posted by Dan Owen at 11:48 AM