Steak & Eggs are a Nutritional Train Wreck! But!.... 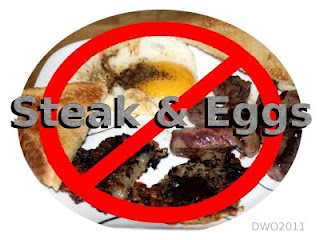 Eating healthy is a problem for me and a lot of other people I know. In a previous blog, I wrote about what a nutritional train wreck a traditional steak and egg breakfast is. This meal consisted of a small portion of steak, hash browns, one egg, toast and milk. Now, any food that is high in calories, loaded with salt and which administers a boat load of cholesterol is probably not a good thing. Did I mention that the taste was out of this world?
Knowing that all things can be improved, I thought it would be interesting to see if I could preserve some of the more desirable aspects of this repast, while also cutting back on both the calories and the cholesterol via alternative food choices. (Think food downgrade). For this effort, I decided to go with a so-called fake egg substitute (Egg Beaters) and a couple of vegetable sausage patties made by a company called Morning Star.
Now here is a picture of the meal along with a nutritional panel of the homemade regular steak and eggs I made a week or so ago (note – ‘cl’ is cholesterol in milligrams): 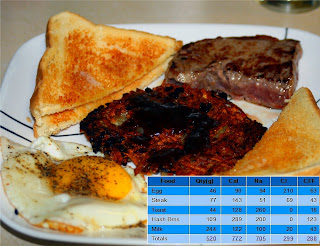 If you’re on a 1500 calorie a day diet, this will be about all you’ll be allowed to eat for the 24 hour period. Other than the fantastic taste, there just isn’t much to recommend here. But, there is that taste thing! OK, so now let’s look at the substitute meal along with nutritional information about it: 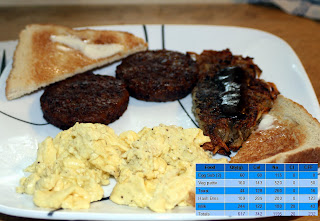 Gee, not much of an improvement other than in the cholesterol department! (For most people anything higher than 200 mg of cholesterol per day is on the high side of things). The sodium level in both meals is unacceptable as are the total calories. Also, both are a pain to make at home.
The bottom line, then, is to do what I do. Forget this whole mess and go out to a nice restaurant like Charlie’s Ribs Steak and Ale, plunk down some cash and have the real deal once or twice a month. That kind of intake is nutritionally doable and you’ll totally enjoy the experience.
Posted by Dan Owen at 10:26 AM