MRSA: So what’s there to be afraid of?

The following blog constitutes some of the informational research I am currently doing concerning a problem which I feel is not getting enough world-wide attention. I will hopefully have more to contribute as time allows.
Staph, as it is commonly known, has been around with (and on) man for tens of thousands of years. During that period, it has been a small non-threatening part of the microbial fauna that lives on the skin of man. No big deal. That was then. In more recent times, a new form, methicillin resistant staphylococcus aureus or MRSA evolved. It's thought to have arisen sometime in the sixties as a result of the indiscriminate use of antibiotics that were considered a cure-all and which were disseminated by physicians for everything from ear aches to cuts and abrasions. Helping to exacerbate the problem, some patients didn’t follow the proscribed course of drugs for whatever reason. 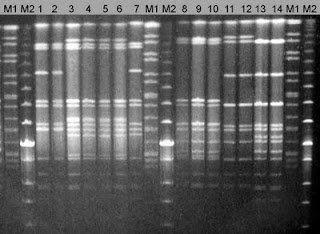 This medical sloppiness, as it were, occasionally allowed some of the bacteria to survive with new found resistance to the very drugs that were being used to kill them. Today, MRSA has diversified itself and has become eight principle versions or strains named USA 100, 200…800 by the CDC. Identification is based on the unique ‘fingerprint’ that is obtained using a lab technique called PFGE (Pulsed field gel electrophoresis) that leaves streaks on a length of gel plate that identifies the exact strain being tested. Of the eight varieties, USA100 used to be the most common ‘hospital’ strain that would result in relatively minor skin lesions and boils on patients, especially those whose immune system was compromised. It has since been rapidly overtaken by the much more serious form known as USA300 that also carries a gene know as PVL (Panton-Valentine Leukocidin) that can wreck havoc on tissues by, in effect, dissolving them. A process known as necrosis.
Luckily for most, USA300 expresses itself in many and sundry forms, most of which are relatively mild and which can be cured with the right application of drugs. But, when it does decide to get bad, it can kill a patient within days!

What concerns researchers the most is the habit of this bacterium to rapidly acquire new and more efficient means of shrugging off drugs that used against it. They do this through various mechanisms (conjugation, transformation, et al.) that allow gene segments to be traded a little like baseball cards. (A gene insert known as mecA is what was originally responsible for MRSA to become resistant to methicillin in the first place). 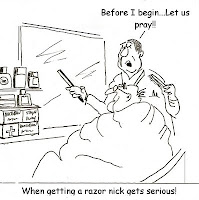 They fear there may come a day when no drug will work, at which point, even a small nick by a razor could became a death sentence. (This would be akin to the situation a warrior would find himself in the Middle Ages before infections were understood or effectively treated. Back then, even a minor cut by a sword in battle was often life ending)!

Disclaimer: All material in this blog entry are of the author and are meant to be read for informational content.
Posted by Dan Owen at 12:02 PM