Pyrotechnic Nabobs of the Night! 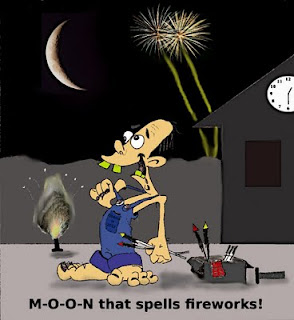 Every Fourth of July, for years now, I’ve suffered from a particular form of insomnia. While there is no scientific name for the condition, I like the term ‘Crackeritis’. The symptoms begin around sundown and go far into the night. This being due to one or more intelligence handicapped individuals who persevere with their explosive celebrations well into the wee hours of the night.
After all the other neighbors have brought their pyrotechnic celebration to a booming end somewhere around 10PM, these mental midgets continue onwards with a boom here and a bang there. They remind me a lot of an old man with an enlarged prostate trying to empty his bladder one dribble at a time.
Lying there in bed, I’ve formed a mental picture of what these specimens of humanity must be like were I to meet one face to face. For starters, they must be very young, that’s a gimme. And, I would bet they may drink to excess since they have absolutely no sense of time. The kind of people who have very little regard for their fellow man and if asked what the Fourth was all about would only utter ‘Whuut’? (Deep thinkers and followers of history)? Not on your life! Oh, and women, you can forget about that for these guys. No girl in her right mind would put up with a stooge like that.
So, what does that leave us with? I give you a young, acne riddled, alcoholic retard who is also a social recluse that hides out in his bedroom while everyone else is out working for a living. More than likely, the money he spent on his fireworks came from his unemployment check which also irks me no end. A man whose only real talent lies in his unswerving ability to annoy others.
In other words, I’ll just bet you he’s a Democrat!
Posted by Dan Owen at 9:26 AM