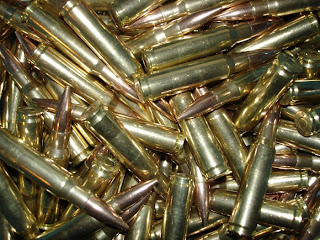 If it were not for the likes of President Obama and some of the others comprising the Far Left, the current incredible run on guns and ammo might never have transpired. As it is, Americans everywhere have bought so much ammo and so many guns, all based on fears concerning new laws, that even many enforcement agencies are now facing their own shortages!

This shortage has also affected the Department of Homeland Security which has announced that it wants to buy more than 1.6 billion rounds of ammunition in the next four or five years for it own ‘training programs’. (This would be somewhat more that the estimated 470 million rounds that were used to fight all of the last Civil War)! And, all this pressure is sure to have at least two other effects; 1) the cost of purchasing ammo will increase dramatically in the near term, and 2) Obama will be soon seen as a real asset to gun and ammo manufacturer’s everywhere! Heck, they may even give him some sort of award!
Posted by Dan Owen at 10:35 AM

Email ThisBlogThis!Share to TwitterShare to FacebookShare to Pinterest
Labels: ammo and guns sales strip suppliers, Forsthkid, HLS wants a billion and a half bullets, Obama a Godsend to gun manufactures