Making it last longer in the slow food lane!

One way to make it all work in this dismal economy while still socializing has to do with eating out. My personal thing is to get up early and to go out for breakfast. Something I do about twice a week. It gets my day going on a positive note or failing that, it at least gets me out of bed.

On my last outing, I ordered the steak and eggs platter from a local eatery. The cost was $9.54. But, rather than eat it all I one setting, I brought some of the hash browns and about half the steak home with me. The next morning, I cobbled together a rather nice repast that ameliorated the high price of eating out to some extent.

How many of you out there think that really bad times are ahead?

Show of hands! Now, I'm not talking about bad times in the sense that bread will cost $5 a loaf or bad times in the sense that unemployment remains high. No, I'm talking about a flat out AMERICAN REVOLUTION or even a CIVIL WAR where a whole lot of shooting will be going on right in your very own neighborhood. (That's usually the end result of a collapsed economy isn't it)? I mean, if (or when) the dollar becomes worthless, what do you all think is going to happen to our society? Do you think your government will bail everyone out? Or, will we all wonder where the heck all the public officials have disappeared to....?

You know, at a time when many of us don't even know our neighbors very well, something like a civil war can be a very scary thought. In the last civil war, we had the local community and church to fall back on. Yet I wonder, if things go really south, who will have my back today?

How can something so small, make me so miserable? 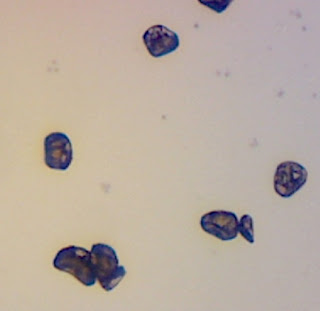 This picture was taken through my microscope and it shows pollen grains at about a 250x magnification. I collected this pollen from a nearby juniper tree of which there are about a billion near my home. I also happen to be very allergic to this pollen (among others). And those trees! They're all absolutely loaded with the stuff! (A fact that does not bode well for me over the next many weeks).

As part of my defensive plan, I've purchased a small HEPA air filter and have installed in into a small room which is where I shall retreat to if my nose begins to run. If this plan works out, I'll be sure to do a follow up later this spring. and oh, yes! Happy St. Patrick's Day!
Posted by Dan Owen at 9:10 AM