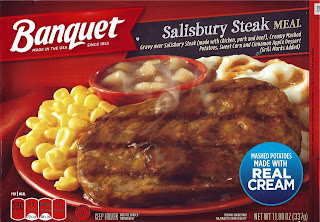 It took me quite some time before I came to the realization that TV dinners actually evolved and changed. What existed in 2015 was not what was offered in 2017! Only the price of $1.29 seemed to remain somewhat constant.

One of the changes was the masked potatoes, or what I would better describe as baby vomit. The texture was wrong and the taste a bit on the grainy side. Not cool.Even repeated nuking in the microwave did not improve that mush. Likewise, I never got a good look at the Salisbury steak as it was covered by an annealed mass of sauce. But, unlike the mashed potatoes, it tasted OK.

On the better side of things, the corn tasted like corn (duh) with the desert being the real star of an otherwise very disappointing late afternoon encounter. Other insults that came from this 350 calorie mess were the extremely high doses of saturated fats (23%) and the completely insane load of sodium at 1340 milligrams. (Were I a much younger man sponging off of poor parents, and that was all they could afford, I could live with it. But, as an older and hopefully smarter person, I elected to dump most of it into the trash...).