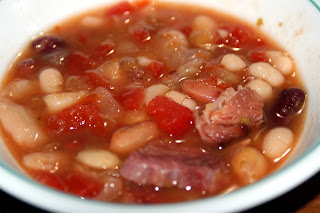 Taking a cue from a package of Hurst's 15 bean soup package, I thought to try out an 'Owenized' version, using just the foodstuff I actually had on hand.

For this meal I used a small 2 quart Crock Pot, that I had ordered from Amazon, as it does a great job when cooking up smaller amounts of food.

To start this recipe off, I rinsed the beans (about half the package) and added them, along with the onion, ham hocks, broth, garlic and Cayenne pepper into the Crock Pot which was set on high. The lid was put on and it was allowed to cook for 5 hours. (Note that if you boil the beans prior to adding them to the slow cooker, the time is reduced to about three hours). After that time had elapsed, I removed the ham hocks, cut off the meat and discarded the bones. I also checked the beans for tenderness. I then stirred in the can of diced tomatoes, lemon juice and ham flavoring.

I let this cook for an additional 30 minutes to allow the flavors a chance to meld. Serves about 4.

Notes: The Crock Pot I used, when set on high, reached a temperature of about 232 degrees Fahrenheit. This was hot enough to cause the contents to slightly boil or simmer.