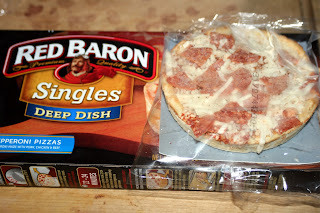 It had been some time since I'd had any pizza and so it was that I bought a Red Baron Deep Dish pizza package at my local grocery store on a whim. There were two small pizza's in a box that cost me $3.34. when I opened the box up, after I got home, I was surprised to see how small they were. Almost immediately I was then shocked by the nutritional information! Each little pizza 'bomb' that weighed a mere 159 grams or a third of a pound or about 5 ounces contained 430 calories, 20 grams of fat, 40 mg of cholesterol and 990 mg of salt! In other words about as bad a piece of nutrition as there is anywhere to be found! And, while I may be somewhat suicidal, I wasn't crazy!

To that end, I made the quick decision to only try ½ of a serving. By doing that I cut the whole nutritional mess down to a livable portion. I then substituted in a small salad and called it a day.

The taste of my little portion was as feared. Incredible! My only complaint was that I felt that the crust was a bit too crunchy. But, why is it that the poorer a food is, the better it seems to taste overall? Mine was gobbled up so fast, I almost bit off my fingers! I then finished this lunch off with the salad that served as a rather boring counterpoint the the entire interlude.