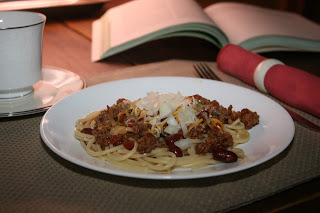 I like chili and spaghetti, so it was nice when I first heard of this very popular dish. According to my research, Cincinnati chili originated with immigrant restaurateurs from the Macedonian region who were trying to expand their customer base by moving beyond narrowly ethnic styles of cuisine.

Tom and John Kiradjieff began serving a "stew with traditional Mediterranean spices" as a topping for hot dogs which they called "coneys" in 1922 at their hot dog stand located next to a burlesque theater called the Empress. Tom Kiradjieff used the sauce to modify a traditional Greek dish, speculated to have been pastitsio, moussaka or saltsa kima to come up with a dish he called chili spaghetti. He first developed a recipe calling for the spaghetti to be cooked in the chili but changed his method in response to customer requests and began serving the sauce as a topping, eventually adding grated cheese as a topping for both the chili spaghetti and the coneys, also in response to customer requests. To make ordering more efficient, the brothers created the "way" system of ordering.

That style has since been copied and modified by many other restaurant proprietors, often fellow Greek-Macedonian immigrants who had worked at Empress restaurants before leaving to open their own chili parlors, often following the business model to the point of locating their restaurants adjacent to theaters.

My meal selection on this day, was a five way order meal-a-deal! Following is a list of 'ways'.